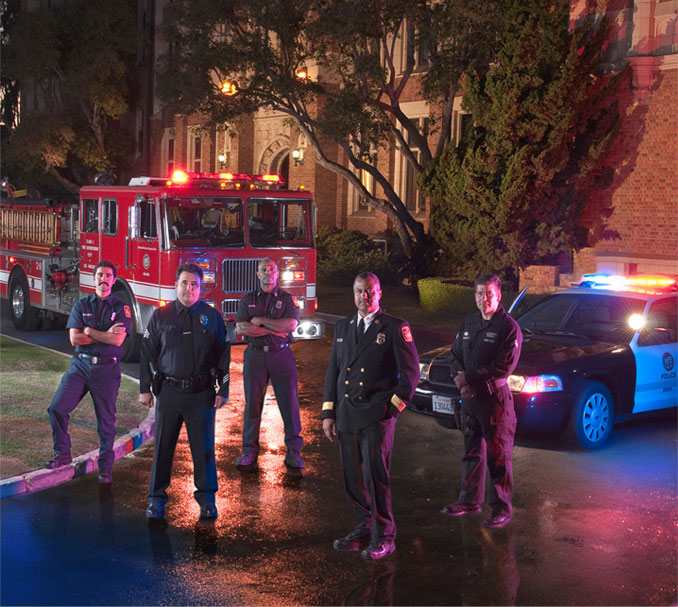 Every once in a while, a real barnburner shot comes along- big idea, big cast, lights, cameras, and lots of action.
The image was a cover portrait of the Los Angeles Fire Chief and city first responders. Art director wanted the scene to look like an opening of CSI; Urban, early evening, police lights, atmosphere… I love it. Bring it on!

The process took three days; one to check the location thoroughly, arrange for security, blocking traffic, as well as spending half a day finding and arranging power outlets in a hundred year old building. Updated of course, but woefully short of juice. We ended up with half a mile of extensions all over the complex. Second day was for set up and a complete dress rehearsal with stand-ins. We were shooting on an active thoroughfare so we had to set up all day, do the test, then break everything down AND set it up again the next day.

The light window for our shoot was about 15 minutes at twilight. All set to go– players were waiting, sun setting, all systems are go, except– the fire engine we requested had a sudden call. Scramble time. But hey, helps to have the CHIEF on site! Quick call and another on its way with dispatch. 5 miles away….
Tick, tick, tick, …5 minutes to go, 4… and there he was screeching around the corner, siren blaring. (I wondered what that Chief said on the phone.) An assistant dashed over to direct him in as I placed our heroes on their marks. Pull to a stop- turn on the running lights and fire away…

12 frames. That was it. Talk about waiting to exhale. No wonder I have grey hairs. But all’s well that ends well. Didn’t even need much PS.
All in a (three) days work.

This entry was posted in Blogs.